While the unwinding mainspring drives the watch hands, it powers a crystal oscillator through the generator inside the watch to control smooth movement of the hands.

The spring-driven electronic speed control watch has the same mechanism as a mechanical watch, except for its control system. The watch was invented in the 1970s when quartz watches had been developed and commercialized, in order to make higher precision mechanical watches. When the watch was first developed, the oscillation circuit inside the watch required more energy than the energy produced by the unwinding mainspring, and the energy imbalance was even greater than the automatic power generating system watch. After reducing the power used in the oscillation circuit and improving the efficiency of the generator, the spring-driven electronic speed control watch has been commercialized.

The mechanism of the watch is as follows: 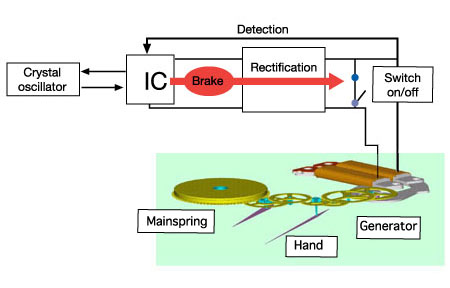 (Note): The above information applies to the members of
the Japan Clock & Watch Association and their products.