A mechanical clock was first produced in Japan and it developed as a very special clock.

Arrival of a mechanical clock

The European mechanical clocks and their production techniques were first brought to Japan with Christianity around the end of Muromachi period. The oldest record says that in 1551 when a Spanish missionary Francis Xavier asked Yoshitaka Ouchi, a daimyo of Suo Province -current Yamaguchi prefecture- for missionary work of Christianity, he sent him gifts and a chiming (mechanical) clock was one of them. However, this clock no longer exists. The oldest remaining clock in Japan is preserved in Kunouzan Toshogu Shrine in Shizuoka prefecture as treasure. It is a spring-driven table clock given to Ieyasu Tokugawa in 1612 by an adelantado in then-Spanish Mexico.

Manufacturing of mechanical clocks in Japan

As Christianity spread in Japan, missionaries established vocational schools affiliated with churches in Kyushu and Kyoto. In addition to print technology, organs, and astronomical instruments, these schools taught production techniques for clocks. Japanese blacksmiths manufactured clocks under the guidance of these schools, resulting in the first mechanical clock production in Japan.

According to the "Owari-shi" (a periodical from the Owari territory) compiled in 1832, Sukezaemon Tsuda from Nagoya City repaired a clock belonging to Ieyasu Tokugawa, and then used it as a model to create a new clock, which he offered to Ieyasu. For his service, Sukezaemon Tsuda was employed by Ieyasu in 1598. However, the shogunate government soon banned Christianity and adopted a policy of seclusion, which blocked the flow of new technology from Europe. Thus, it was possible to come in contact with cultural items from places such as China and Holland through Nagasaki only, and this also affected Japanese traditional clock production.

Clock makers gradually increased around the country, with many working as personal clock makers for the shogunate family and feudal lords for whom they were making gorgeous articles. Japanese traditional clock production sites included first and foremost Nagasaki, as well as Matsue, Kyoto, Osaka, Sakai, Ise, Nagoya, Wakasa, Edo, Sendai, Morioka, and Hirosaki.

In Europe, mechanical clocks appeared as timekeeping switched from a variable to fixed method, but Japan at that time used a unique temporal hour system. As a result, clock production basically remained a copy of early European methods. Rather than work to increase the precision of clocks, Japanese clock makers focused on creativity and originality to conform to the country's unique temporal hour system. This resulted in the development of unique Japanese traditional clocks not seen elsewhere.

Hour system during the Edo period

Knowing an hour system during the Edo period is necessary to better understand Japanese traditional clocks.

Time systems that divide the length of one day into 100 equal parts or 12 equal parts and so on are referred to as fixed hour systems, with the current system divided into 24 equal parts. On the other hand, a system that divides one day up into day and night and then partitions each of these into equal parts is referred to as a temporal hour system. Since the length of days and nights vary according to the season, the length of the partitioned units of time also changes. In the Edo Period the standards for time were defined as sunrise (six at sunrise) and sunset (six at sunset), based upon which the day was divided up into a daytime and a nighttime that each consisted of six equal parts. The temporal hour system was complicated in that the length of a single koku, the partitioned unit of time, changed depending on the day and night, and also by season. Time was represented by the 12 signs of the Chinese zodiac and called by the signs such as the times of the rat/bull. The numbers from four to nine were also arranged to call times by setting the times of the rat/horse as nine. However, this number system has the same number twice a day, so the differentiation of day and night as well as sunrise and sunset was necessary, including nine at night and day, and six at sunrise and sunset.

There are various types of Japanese traditional clocks, including purely Japanese forms in addition to their unique functions.

A broad classification based on mechanisms is as follows.

Preserved in The Seiko Museum.

Early Edo Period. The dial rotates once a day, while the indicator remains fixed. In early models, the bell was often thick, and the bell stopper had a double loop shape. Because of the single-foliot balance, the position of a small weight hanging down from the foliot was adjusted twice a day at sunrise and sunset to synchronize with the time of each season.
(Machine height: 43.0 cm; width: 14.0 cm) 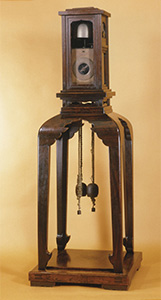 Mid-Edo Period. This large clock measures 218 cm in height and is reportedly discovered in the keep of Inuyama Castle.
The indicator rotates once a day. The side panels are made of brass and there is a record that says "Repaired in November 1799" under the dial. (Machine height: 57.0 cm; width: 20.0 cm)

Lantern clock with a double-foliot balance 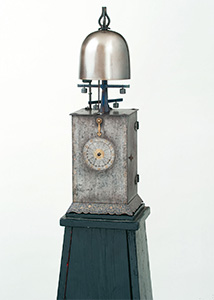 Early Edo Period (1688). Believed to have been made by Sukezaemon Tsuda (third generation). The double-foliot balance is the oldest currently confirmed. Double-foliot balances for day and night are attached, and the clock switches automatically at sunrise and sunset. As a result, the positions of the small weights only need to be adjusted 24 times a year. It is said that Sukezaemon Tsuda (first generation) manufactured the first mechanical clock in Japan. (Machine height: 36.0 cm; width: 11.5 cm)

Lantern clock with a double-foliot balance 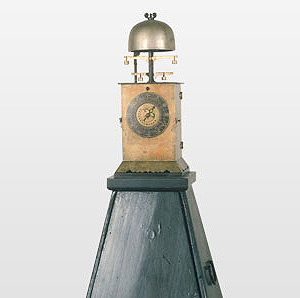 Edo Period. Made in Japan. Japanese clock designed to rest on a stand resembling a bell tower or fire watchtower. Driven by a weight. Japanese traditional clocks in the Edo period were modeled after European clocks but complied with Japan's unique time system "an temporal hour system", wherein one day was divided into two, and then further divided equally respectively. 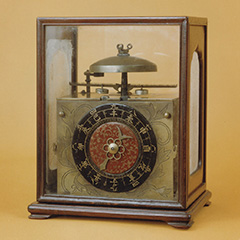 Late Edo Period. This spring-powered table clock uses a single-foliot balance. The fine engraving of the brass panels and gold arabesque-patterned lacquer on the vermilion-coated rotating dial result in a splendid clock. Characters indicating "half past" can be seen on the dial.
(Machine height: 14.0 cm; width: 11.0 cm; depth: 7.0 cm) 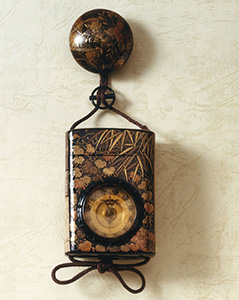 Late Edo Period. Japanese-version of a portable compact watch in a casing resembling a pillbox.
The dial rotates to keep time. The case is made entirely of turtle shell and covered completely in lacquer. This splendid clock has a sundial and compass in the lid.
According to writing on the box, the clock belonged to Nariaki Tokugawa (whose posthumous name is Rekko) of the Mito domain.
(Machine height: 5.3 cm; width: 4.5 cm; thickness: 2.5 cm)

The Pendrum Clock of the Automatic Display for the Seasonal Hour 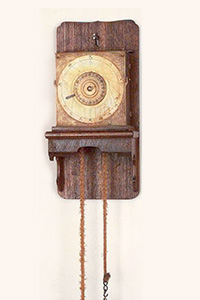 Late Edo Period. Uses gradations of the temporal hour system drawn in a circle-graph form. On this very rare clock, the indicator, which expands and contracts automatically and circles around only once a year, indicates the time of each season automatically. (The indicator is at its longest at the summer solstice and at its shortest at the winter solstice.) A pendulum is used for speed control.
(Machine height: 15.0 cm; width: 15.0 cm; thickness: 7.0 cm) 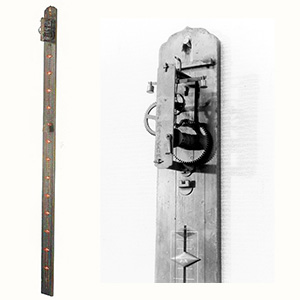 Made by Yamatojo Araki in the An'ei Era (1772-1780) of the Edo Period. Because the hoisted weight falls at a constant speed, the position of the diamond-shaped rotating dial (the part to display time) is used to synchronize with the temporal hour system.
(Height: 136.5 cm; width: 7.5 cm; machine height: 11.0 cm) 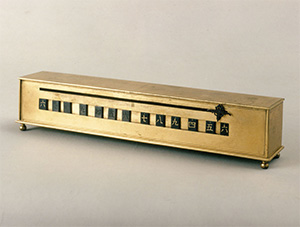 Edo Period (Bunsei Era: between 1818 and 1829). Made by Noriyuki Ohno Yasaburo (a clockmaker at the feudal Edo government's calendar station). This table clock also served as a paper weight. A rotating dial. As the spring unwinds, the indicator moves along the hour line. Signature engraved on bottom surface.
(Height: 3.5 cm; width: 17.0 cm; depth: 3.5 cm) 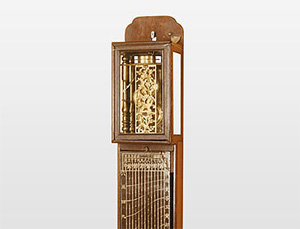 Edo Era. Wall clock driven by a plumb bob. This original Japanese clock features a plumb bob that doubles as a time indicator. Also called a board clock. In addition to corrugated dial panels, the manufacturer made versions featuring dial panels with replaceable faces and movable indication marks. 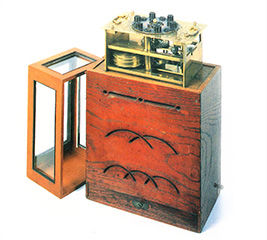 Made in Japan in the Edo Period. This clock consisted of a mechanism whereby balls that had been placed within the cylinder in advance would fall at regularly appointed times due to the rotation of the dial, and would strike bells with three different tones to inform people of the time. At the base there is a drawer from which the balls can be recovered.

Although Japanese traditional clocks have various mechanisms to synchronize with the temporal hour system, there are basically two methods: 1) Change the operation speed of the machine as necessary, or 2) Set a fixed operation speed and adjust the time using a dial.

1) Change the operation speed of the machine

With a foliot balance, as the positions of the left and right small weights move apart, it swings slower. As they move closer, it swings faster. In this manner, the operation speed is changed. With a single-foliot balance, the position of the weights must be changed each day at sunrise and sunset to synchronize with the temporal hour system. When a double-foliot balance was developed at the end of the 17th century, it became better for the double-foliot balances for day (upper) and night (lower) to switch automatically at sunrise and sunset to synchronize with Nijushisekki (the 24 divisions of the old calendar) and have the small weights moved just 24 times a year.

At the end of the Edo Period, pendulums and balance springs started to be used in speed regulators. Because it was difficult to adjust the time variations of both the four seasons and day and night mechanically, a rotating dial that changed the time interval was conceived. The small rotating dial is engraved with text for 12 periods of time (the 12 signs of the Chinese zodiac or numbered hours from 9 to 4). The dial can move to the left and right by a rail mechanism and align with time interval in accordance with the relative lengths of day and night by season. 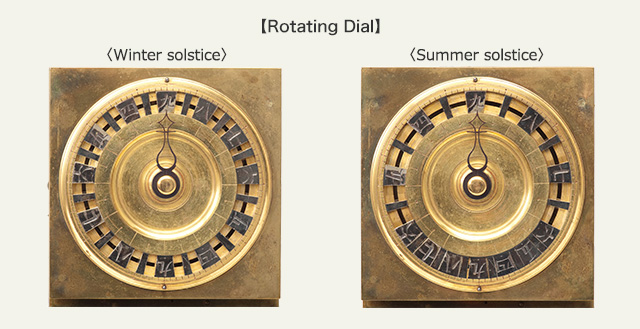 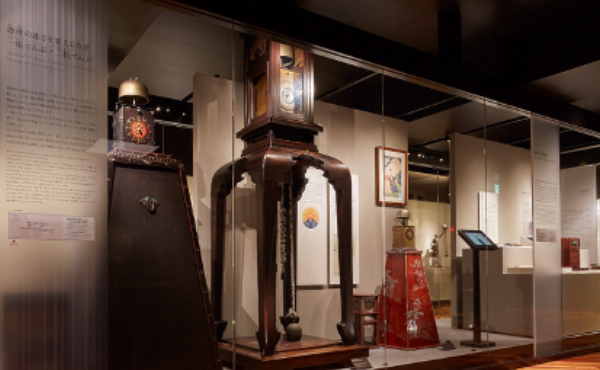 Extensive Information about Time and Timepieces